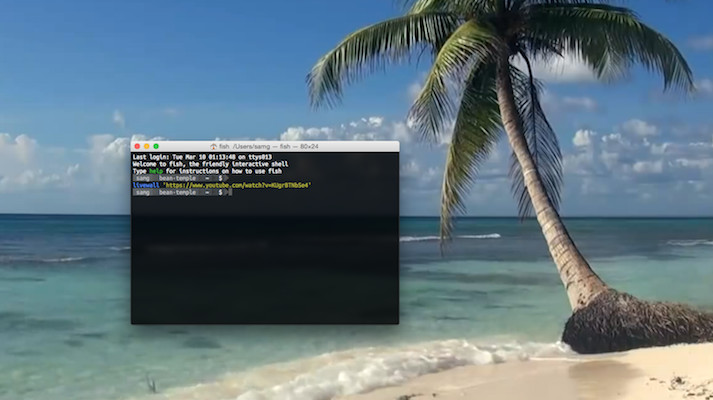 A while back I wrote a little Bash script called livewall to do live wallpaper on OS X. I'd heard that nature boosts productivity and I thought I'd see if I could add a little bit of earthy soul to my sterile aluminium-and-glass work environment. Given at least some of those results suggest that just seeing a green rectangle would be sufficient, I may have somewhat overcomplicated the task.

I looked at a few commercial solutions, but none of them seemed that amazing. Most were more expensive than what I wanted and didn't seem to do very much other than just play video. They also had in-app purchases, so you would have to pay more once you installed them to access the full library of wallpapers. More importantly, though, I'd recently resolved to get my hands dirty more. Although I could certainly pay someone for software to do what I need, there's a certain rugged outdoorsman-type satisfaction in solving your own problems by the sweat of your brow - for certain fairly low standards of ruggedness.

Two breakthroughs made it fairly easy. The first is that my beloved VLC actually has a wallpaper mode, though you have to do a bit of massaging in recent OS X versions to make it work. The second is that Youtube actually has quite a lot of suitable nature videos:

Armed with livewall and my library of nature videos, I had a quite relaxing couple of hours working with a more animated Yosemite background. Then I went outside and saw the sunset, and I realised how woefully inadequate even a high-res display is when compared with the beauty of the real world.

Oh well, I tried. Besides, you can't be outside all the time.